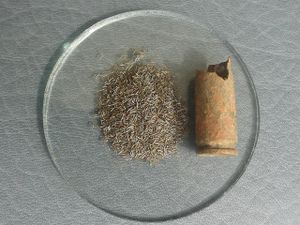 Smokeless powder is the name given to a number of propellant materials, widely used in firearms and artillery, which replaced black powder. As its name suggests, it produces very little smoke when fired/ignited.

However, despite its name, smokeless powder is rarely a powder, but rather it appears as pellets or extruded granules.

There are lots of categories of smokeless powders, which depend on their properties, such as composition, speed of combustion, etc.

Most if not all smokeless powders contain nitrocellulose (NC), and they are split into three main groups:

Smokeless powder is a silvery-gray or dull gray solid, insoluble in all solvents (though nitroglycerin and nitroguanidine will dissolve in organic solvents). It is typically odorless, with a density between 0.9-1.0 g/cm3.

Smokeless powder is sold in many countries as gun powder, and is available in most gun stores. Acquiring it may or may not require a gun's license, depending on the country.

In Europe, occasionally one might accidentally dug up WWII ammo, which, if intact, still has usable smokeless powder, though of a lower quality than modern powders. However, due to legal issues surrounding UXOs and common sense, it's best to avoid making a habit out of this practice.

Smokeless powder can be made by mixing nitrocellulose with small amounts of nitroglycerin and other additives in a solvent, such as acetone.

The procedure for manufacturing smokeless powder is more dangerous than that for classic black powder. The process must be carried out in 100% dust free, high humidity environment and everything must be grounded to prevent static charge build-up. Also, every trace of acid must be removed from the nitrocellulose, as traces of acid initiates self catalyzing decomposition.

As with any nitroester, it's best to avoid exposure, as being a strong vasodilator, will induce severe headaches and chest pain.

Smokeless powder is best stored in spark-free containers, away from any ignition source or strong base. Diphenylamine can be added as a stabilizer.

Smokeless powder can be safely burned outside. It can be dumped in ground, in small quantities, as it is a good nitrogen source for plants.