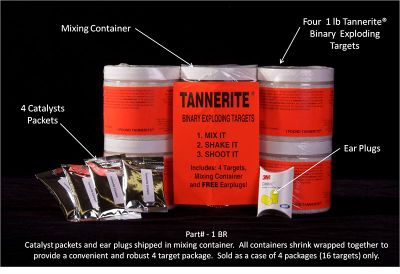 Commercial Tannerite pack, containing the oxidizer and the fuel.

Tannerite is the brand name of a binary explosive, made from ammonium nitrate (oxidizer) and aluminium powder (fuel), that is supplied as two separate powders that are mixed and shaken to produce an explosive.

Although both have NH4NO3 and aluminium powder as their main ingredients, the main difference between Ammonal and Tannerite is that the former also has 2.4% charcoal or TNT in its composition, while the latter does not, though some Tannerite formulations may also have 5% 325-mesh titanium sponge and 5% 200-mesh zirconium hydride, as well as a few percentages of ammonium perchlorate in the ammonium nitrate.

Tannerite generally consists of 90-95% ammonium nitrate and 10-5% aluminium powder by weight, though not all home made Tannerite follows this ratio.

Other formulations specify that the fuel component consists of 90% 600-mesh dark flake aluminum powder, combined with the catalyst which is a mixture of 5% 325-mesh titanium sponge and 5% 200-mesh zirconium hydride, while the oxidizer is 85% 200-mesh ammonium nitrate and 15% ammonium perchlorate.

Tannerite is a white-gray granular material. It is stable when subjected to forces less severe than a high-velocity bullet impact, such as being dropped, a hammer blow, or impact from a low-velocity bullet or even shotgun blast. Tannerite is not flammable – an explosion cannot be created by a burning fuse or electric arc. Tannerite has an average density of 1.8 g/cm3 and a detonation velocity between 5000-7000 m/s.[1]

Tannerite is freely available in the US, although restrictions exist on transport, storage and use.

In other countries, this product may be considered explosive material/precursor, depending on the legislation.

When the components are kept separate, Tannerite is stable and safe to handle.[2]

Tannerite as separate components should be kept in safe places.

The regulations on binary explosives state that:

Some states place restrictions on where it can be used. As it is sold as two separate powders, it can be generally transported and sold without the legal restrictions that would otherwise apply to explosives.

Safely detonating it in a special area. As it does not explode when burned, it can also be neutralized via controlled incineration.