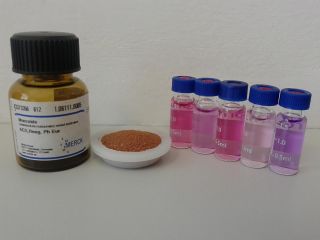 A vial (also known as a phial or flacon) is a small glass or plastic vessel or bottle, often used to store medication as liquids, powders or capsules, though they can also be used to store small amounts of reagent.

Some types of vials are used scientific sample vessels, like those used in autosampler devices in analytical chromatography, to determine traces of compounds dissolved in liquids.

Vials consist of a small bottle, made of plastic, glass (clear or amber). Most often they have a screwed lid, made of plastic with a rubber membrane to aide in sealing. Some vials lack screw thread and instead a rubber septum is used to seal the bottle. The rubber septum is held tight on the vial thanks to an aluminium outer seal, leaving only the center exposed. This is a common feature on injectable medications.

Vials can be purchased from most pharmacies, medical stores, either as medications or empty. Various stores, like beekeeing suppliers, drugstores will sell empty screw cap vials (often amber) in different volumes. They can be cheaply bought in bulk.

Lastly, a huge variety of vials can be bought online cheaply.

If you have a small tube of either glass or plastic which is closed at one end, you can cut a rubber, plastic or cork stopper with the diameter just slightly a bit bigger than the inner diameter of the tube, to properly close the tube.