With superbases (e.g., organolithium reagents), it can be doubly deprotonated to give LiCH2CO2Li. Reduction of acetic acid gives ethanol.

Acetic acid will react with alcohols in the presence of a catalyst, such as sulfuric acid to form esters: 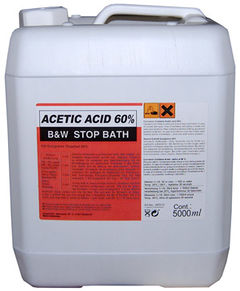 Acetic acid is also used in photographic stop baths, which consists of high concentrations of buffered acetic acid, often with a pH indicator included. These can be removed through distillation. Glacial acetic acid can be purchased from online suppliers for modest prices as well.

Acetic acid is also sold by some beekeeper stores, in various concentrations, such as 60%, 80% and 100%.

Acetic acid can be neutralized with a base or a carbonate, such as calcium carbonate. Concentrated acid should be diluted first, before neutralization to prevent splashing.