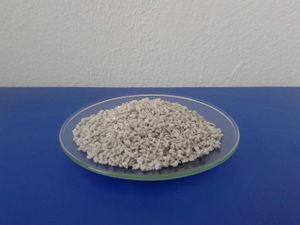 Boiling chips are frequently employed in distillation and heating. When a liquid becomes superheated, a particle of dust or a stirring rod can cause flash boiling. This very rapid boiling can be extremely violent and cause reagents to splatter, possibly causing severe burns, ruining experiments, and damaging equipment. Boiling chips work by providing nucleation sites so the liquid boils smoothly without becoming superheated or bumping.

Boiling chips are made of a chemically inert material, like glass, quartz, or calcinated porcelain. They appear like flakes or beads, with a rough surface, necessary for nucleation.

Boiling chips can be purchased from lab suppliers. They are available as either glass or ceramic.

The easiest and cheapest way to make boiling chips is to smash porcelain or similar ceramic materials into small bits. Avoid using glazed ceramic, as it doesn't have rough surface necessary for nucleation. Broken shards of sintered glass frit, as used in filtration, is also effective.

Glass shards or quartz pieces can be used, but because the surface of these materials is smooth and not rough, they are not suitable. To make their surface rough, there are two ways: sandpaper the glass/quartz surface using a very abrasive material (SiC, WC, diamond, etc.) to make it rough, or chemical treatment using hydrofluoric acid or hot aq. alkali (sodium hydroxide, potassium hydroxide).

Silica gel can also be used as boiling stones, though it may burst at high temperatures.

Chemically cleaned sand can also be used when distilling liquids that tend to bump violently such as sulfuric acid.

Boiling stones help reducing bumping during boiling, but do not eliminate it.