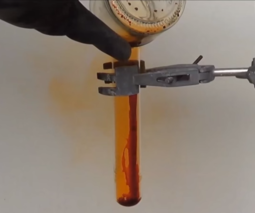 Bromine liquid and vapor being poured into a test tube (youtu.be/qc4ZhcY09Lk)

Bromine is a chemical element, the third lightest halogen on the periodic table, and the only nonmetal that is liquid at room temperature. It has the chemical symbol Br and atomic number 35. This deep red-brown liquid is highly sought-after as a reagent and collectible specimen, though it is very dangerous and difficult to manage and store.

Bromine properties are a mix chlorine and iodine, as can be expected. Less oxidizing than chlorine and fluorine, and more so than iodine, bromine will only displace iodine from iodide salts.

Bromine is quite reactive towards many elements, reacting violently with most metals. It is also capable of reaction with many nonmetals and metalloids, such as the solid chalcogens, pnictogens, and at high temperature silicon and germanium.

A classic reaction is to put a small amount of aluminium foil in liquid bromine. After a considerable delay (often 30 seconds or so) due to the oxide layer, the aluminium melts and catches fire. This throws out white sparks with large clouds of orange bromine and white aluminium tribromide vapor. Done intentionally in a controlled environment, this creates a spectacular display. However, if done accidentally without precaution, this reaction is disastrous.

Bromine finds many important uses in organic chemistry, primarily in the introduction of bromine atoms into a compound. Bromine will react with alkenes, alkynes, and many aromatic compounds quite readily. In combination with catalytic amounts of phosphorus, it is also capable of α-chlorination of carboxylic acids and is the reagent of choice from the bromination of sensitive alcohols. Both of these reactions occur via a phosphorus tribromide; alternatively phosphorus tribromide can be used directly instead.

Like chloride, the bromide ion generally has no affect the colour of a compound, but the element itself is a very vivid orange/red both as a liquid and a gas, similar to nitrogen dioxide. It can be poured with ease as it is not very viscous, and wets glass when it has a water content, but completely dry it does not. Thus, drying bromine samples completely before ampouling them is desired.

The smell of bromine is somewhat difficult to describe, sometimes being called halfway between chlorine and iodine but still very distinct. It is irritating, not to mention dangerous, to breathe.

Ampouled bromine is available to chemical companies and institutions, but is not usually available to individuals due to shipping restrictions and health and safety issues for such a dangerous chemical.

Bromide salts can be found online relatively cheap with no shipping restrictions. Bromides can sometimes also be found in pool stores as a replacement to traditional chlorine pool treatments.

There are a few methods to producing elemental bromine, none of which should be taken lightly.

Depending on the chemicals available and the level of purity needed, different methods exist. Probably the most popular method involves oxidation of bromine to bromate via electrolysis. Other methods involve displacement with chlorine, but that leads to interhalogen compounds and can be quite difficult.

A high-yield synthesis with relative ease involves the oxidation of sodium or potassium bromide with potassium permanganate and an excess of sulfuric acid, followed by careful distillation in a fume hood or outside. In this process, the potassium permanganate is added to a saturated solution of the bromide salt, and the mixture transferred to the boiling flask of a simple distillation setup. Sulfuric acid is added dropwise using an addition funnel throughout the distillation, as the addition is very exothermic and can cause a very destructive runaway reaction to proceed if it is not added carefully. Bromine spills, as well as residual bromine remaining in the apparatus afterward, can be neutralized using alkaline solutions of sodium bisulfite or sodium metabisulfite(the alkalinity coming from sodium hydroxide), or sulfur dioxide. Bromine produced in this process will contain a substantial amount of water, which can be removed by a combination of mechanical separation using a separatory funnel or pipette, and drying using an agent such as concentrated sulfuric acid.

One who intends to make or use bromine should do lots of research into the risks, safety considerations and hazards of the element. From the damage that the corrosive bromine does on contact to skin, to the toxic effects the thick vapors have on lung tissue, and to the violent reaction bromine undergoes with reducing agents (especially aluminium), bromine is seen by many who have made it as 'an evil element'. While very intriguing in its properties, it is definitely a chemical for the more experienced chemist.

Liquid bromine is extremely corrosive, toxic and oxidizing. It fumes very easily even at low temperatures and reactions with reducing agents often heat it up creating large amounts of thick, toxic orange bromine vapour that is not safe to breath.

Skin contact with this element should be avoided at all costs. Inhaling of bromine vapor and or bromides has shown to cause temporary erectile dysfunction.

Solutions of sodium hydroxide and sodium sulfite/bisulfite/metabisulfite or thiosulphates should be on standby to neutralize any stray bromine to harmless bromide salts.

Bromine is notorious for escaping it's containers. The only lasting solution is to properly seal it in a glass ampule. Glass bottles with a PTFE lid can be used for moderate amounts of time, though the bromine should be kept away from steel objects as the vapor causes them to rust quickly. Usually, if it's stored in a glass container, the bottle is kept in a special cabinet and the lid is sealed with Parafilm tape. The paraffin tape is changed periodically, especially when it starts to turn brown. Alternatively, storing the bromine in a laboratory freezer greatly reduces the volatility and, consequently, the ease of storage.

Bromine can be neutralized with reducing agents such as sodium thiosulfate and sodium metabisulfite which reduce it to harmless bromide ions.