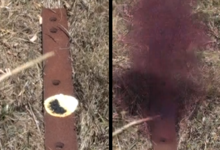 Touch powder just before and after an explosion, from youtu.be/f3FijQX4hDw

Nitrogen triiodide is a touch sensitive explosive often shown in chemistry demonstrations where it is exploded by the touch of a feather. For this reason, it is also known as 'touch powder'.

Chemical reactions with nitrogen triiodide are not done due to its instability.

Insoluble in water and much the same colour as iodine, a dark purple that can be almost brown or black.

It is a super sensitive explosive once completely dry, yet not so when wet. This is because when wet, there are ammonia molecules in the structure of the compound, which helps to stabilize it. When the NI3 dries, these ammonia molecules evaporate so the NI3 structure is left very unstable, needing only the slightest amount of energy from friction or heat to turn into nitrogen and iodine vapour.

NI3 explodes with a loud cracking a cloud of bright purple smoke is produced. It is not a very powerful detonation, but a very pretty one and the violence of its explosion is often surprising when done from a very light touch.

NI3 must be made, and quite often, the iodine crystals need to be made first due to the difficulty and expense of buying pure iodine.

Ground iodine is placed into an excess of ammonia solution. The iodine will not dissolve a large amount but the suspension is left to sit before filtering (the time varies between who you ask, but an hour is usually more than enough time for 20 or so grams). The ammonia solution turns a shade of brown.

The solid is usually not transported but the filter paper is moved to the final position where it is left to be dried in the air. It can be hard to tell when it is completely dry by appearance alone but a light tap with a long stick will detonate it if it is dry.There are many Youtube tutorials on this process.

One must assume NI3 contains a reasonable amount of elemental iodine as a impurity, due to the method it is created by. So all safety risks that apply to iodine, also apply to this solid.

Skin contact with the wet or dry solid will lead to long lasting unsightly brown stains to your skin. [[Sodium thiosulfate] can be used to clean the stains.

This chemical carries all the risks associated with sensitive explosives, but due to the explosion creating iodine vapour, carries the risks of the corrosive and somewhat toxic element too. While not a danger in an outside, windy environment, touch powder will quickly erode steel if exploded over it, as well as staining many surfaces like concrete due to the iodine.

The sensitivity of NI3 once dry cannot be overstated.

Nitrogen triiodide should NEVER be stored! Although it is somewhat stable as a solution in diethyl ether, the risks outweight the benefits.

Dry NI3 is completely destroyed during detonation. This however produces a cloud of iodine vapor, which is toxic and highly corrosive. This is best done outside or in a fumehood. Although most literature claims NI3 and leftovers can be flushed down the drain, it's best to add some sodium thiosulfate, as iodine is corrosive to the plumbing.

Leftover NI3 in the synthesis beaker can be neutralized by adding ethanol, before disposal.[1]