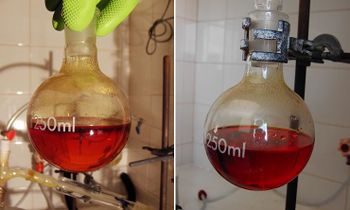 A 250 ml RBF with sulfur dichloride

A round-bottom flask (also called boiling flask, round-bottomed flask, round bottom) or RBF for short, is a type of flask with spherical bottom used as laboratory glassware, mostly often for synthesis and in distillations.

Round-bottom flasks are spherical flasks, made of borosilicate glass (or rarer PTFE), with one or more ground glass joint necks. Usually, the main neck has a larger diameter than the other necks, though flasks with equal diameter necks exist. Size of the ground glass joint depends on the volume of the flask, for example a flask with a volume of 5 or 10 ml cannot have a 29/32 or 29/40 ground glass joint, but it can have 14/23 or 19/24. "Flasks" with the former dimensions, if they exist, are actually ground glass joint female cap plug/stoppers, are often used when working with Schlenk lines, to stopper the male joint of dropping funnels or other glassware with male joints, often when connecting it to the solvent line to collect solvent.

Round-bottom flasks with ball-and-socket joints are used in rotary evaporators, as receiving flasks, since said joints allow easy handling of flasks without the risk of freezing, and don't require greasing or sleeve joints.

Round-bottom flasks can be purchased from lab suppliers and online. Price depends on the size, type and complexity (number of necks).

Inspect the flasks for any cracks. RBFs with any defects cannot be used when working with vacuum.

To make sure they don't roll over the table and fall, RBFs should be placed on cork rings or in Berzelius flasks.