Difference between revisions of "Sodium acetate"

Sodium acetate is the sodium salt of acetic acid, with the chemical formula CH3COONa. It forms a white or translucent powder or crystals that have a variety of uses in the home lab. 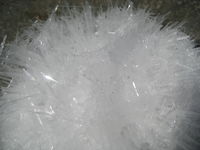 Sodium acetate typically exists as an anhydrous white crystalline powder or as thin, transparent crystals of the trihydrate. When produced using household vinegar, solutions and crystals of sodium acetate may appear golden or amber in color. Sodium acetate has an odor resembling that of vinegar, though slightly more fruity and pleasant. The taste and low toxicity of this compound allow it to be used as a salt-and-vinegar-type flavoring agent in some foods.

Sodium acetate trihydrate supercools easily and will crystallize on contact with a sufficient nucleation site, such as another crystal of sodium acetate or sodium bicarbonate.

Though not commonly found in stores, sodium acetate is easily produced from two common household chemicals: vinegar and baking soda.

Some if not most type of heat pads contain a supersaturated solution of sodium acetate.

Sodium acetate can be crystallized from a solution in which sodium bicarbonate, carbonate, or hydroxide was combined with an equal or excess of acetic acid (distilled white vinegar will work if high purity is not vital). This is the very same reaction behind the common "baking soda volcano" science experiments that produce a voluminous foam of sodium acetate and carbon dioxide.

The main problem with using even the purest vinegar is that distilled vinegar is not pure acetic acid, as there are plenty of extra organics. Distilling the vinegar beforehand produces pure acetic acid. However, obtaining concentrated acetic acid from vinegar via distillation is not easy and requires several distillations to remove the water that also distills due to their close boiling points.

Pure sodium acetate, as well as sodium acetate produced in a sterile environment from vinegar, is of very low toxicity and is even safe to season food with in reasonable quantities (though this usage is not recommended with lab grade chemicals).

Sodium acetate has very little toxicity and doesn't require any special disposal. However, because is a sodium salt it's recommended to avoid dumping it on grass or other plants, as it will kill it. It can however be used as a (weak) weedkiller.