Sodium carbonate, sometimes called washing soda or soda ash, is an inorganic weak base with chemical formula Na2CO3. One of few water-soluble carbonates, sodium carbonate finds abundant use as a cheap source of the carbonate ion, and also as a precursor to other sodium salts. Sodium carbonate occurs in nature as mineral Natrite.

Sodium carbonate will react with acids to form sodium salts and carbon dioxide.

Sodium carbonate is often used in ore refining, in which it is fused with metal oxides at high temperatures to generate water-soluble compounds of the metal. An example of this is the roasting of chromium(III) oxide with sodium carbonate in the presence of oxygen to generate sodium dichromate. 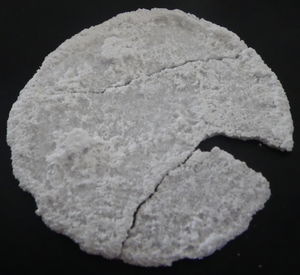 Historically, sodium carbonate could be produced by leaching the ashes of burnt seaweed, but this leads to an impure product. Today, sodium carbonate can be easily and cheaply prepared by the thermal decomposition of store-bought sodium bicarbonate (baking soda), which begins at 50 degrees celsius, but is more rapidly and completely accomplished at temperatures over 200 degrees celsius. Alternatively, it can be be purchased as washing soda or pH-increasing formulas in grocery or department stores, both of which are sometimes as cheap as $1/lb, or as soda ash, which is used as a mordant for textile dying.

As a basic sodium compound, the addition of most inorganic and some organic acids yields a sodium salt of that acid, and due to the almost universal solubility of sodium compounds, these salts can be used in preparing other metal salts of the same anion(for example, the preparation of the lesser-known copper aspirinate using sodium aspirinate and a soluble copper salt). Note that neutralizing a carbonate with an acid evolves large amounts of carbon dioxide and causes lots of bubbling. For this reason, Sodium hydroxide is most often used for titration.

Because many insoluble transition metal carbonates are used as precursors to salts of those metals, sodium carbonate is an invaluable reagent in forming a large number of compounds, first through precipitation of the insoluble carbonate in a double replacement reaction.

Sodium carbonate is non-toxic, though due to its desiccant properties it may irritate the skin.

Sodium carbonate should be stored in closed bottles, away from moisture and acidic vapors.

Sodium carbonate can be safely poured down the drain.