Difference between revisions of "Ytterbium" 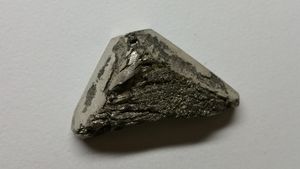 A piece of ytterbium metal

Ytterbium is a lanthanide with the symbol Yb and atomic number 70. It is a hard, silvery metal, sometimes described as slightly brassy, that is about as reactive as magnesium. It is not a particularly interesting addition to the amateur chemist's lab, but it and its ytterbium(II) derivatives are powerful reducing agents that can be used in organic synthesis as an alternative to samarium and its samarium(II) derivatives.

Due to the filled f-shell, the metal has an unusually low melting and boiling point (824 °C and 1196 °C respectively), and is also less dense than most other lanthanides. Melting ytterbium (which must be done in an inert atmosphere to prevent ignition of the metal) will invariably cause some to boil off due to the narrow liquid range. This filled f-shell contributes to ytterbium's extremely low magnetism compared to rare earths such as gadolinium, terbium and dysprosium.

Ytterbium metal changes its resisitivity as pressure or other stresses increase.

Ytterbium is a reactive metal, but it does not tarnish quickly in air due to passivation. It does, however, burn in air to form ytterbium(III) oxide. Ytterbium burns with a characteristic green flame, notably in compositions with hexachloroethane and polytetrafluoroethylene.

Ytterbium reacts vigorously with dilute acids to form salts. Most of these salts are soluble in water except for the fluoride and oxalate. All of these salts are white in color. Ytterbium also reacts with the halogens to form trihalides. The metal reacts only slowly in cold water, but vigorously in hot water, to form ytterbium hydroxide, which is basic enough to absorb carbon dioxide from the air to form ytterbium carbonate.

Ytterbium is more common than iodine on Earth, but it is very hard to find and expensive. One source for ytterbium, as well as other rare earth metals, is Metallium. It is sold in 5 gram and 20 gram sizes, as well as rods, ampoules, and coins. Ytterbium and its compounds are occasionally sold on eBay as well.

Ytterbium compounds have not been investigated for their toxicity, and should be treated as mildly toxic. Ytterbium has no biological role but may stimulate metabolism. Salts of ytterbium, especially the halides, tend to hydrolyze at elevated temperatures and may emit noxious or strongly acidic vapors.

Ytterbium as small pieces will ignite in the presence of an open flame, and ytterbium dust and powder may ignite very easily. Ytterbium and thulium fires may be identified by their brilliant green flames. Class D fire extingushers should be at hand. Water may aggravate burning ytterbium and should never be used.

Ytterbium should be stored in closed containers, away from any corrosive chemicals.

None as of yet - why not start some research on this element?