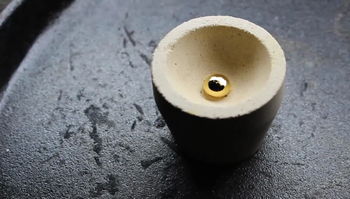 A cupel with a gold bead, courtesy by Cody.

A cupel is a porous pot used in cupellation, a refining process used in metallurgy to extract noble/precious metals like gold and silver from from base metals (lead, copper, zinc, arsenic, antimony or bismuth)

Cupels have the appearance of an inverted truncated cone, similar in appearance to a flower pot. They are made of bone ashes, though fire clay and magnesia can also be used.

Cupels can be bought from smelting companies. They are not very expensive, this company sells a set of 4 cupels for 15 $.

You can make your own cupel by mixing bone ash with an adhesive and placing it in a mold, then waiting for it to dry. According to De re metallica, by Georgius Agricola, the best material was obtained from burned antlers of deer, although fish spines could work as well. Ashes have to be ground into a fine and homogeneous powder before mixed with the adhesive. The resulting mixture is placed in an open brass mould, and the cavity in the cupel is made by pressing a rounded object.[1]