From Sciencemadness Wiki
Revision as of 22:00, 11 February 2016 by Zts16 (Talk | contribs)
(diff) ← Older revision | Latest revision (diff) | Newer revision → (diff)
Jump to: navigation, search
Thulium is a lanthanide with the symbol Tm and the atomic number 69. It is often considered a useless element, because it's rare and expensive, and the other lanthanides have similar physical and chemical properties. 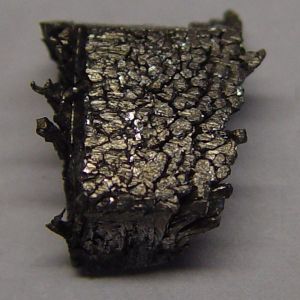 A piece of thulium metal from IrC's collection.

Thulium metal is a reducing agent and is reactive towards acids and oxidizers. Most ionic thulium compounds are soluble except for the fluoride and the nitrate.

Thulium metal has a bright, silvery luster. It slowly tarnishes in air and reacts with water. The metal is soft enough to be cut with a knife. Solutions containing thulium(II) ions often present a wine red coloration. Thulium(III) ions may fluoresce blue under shortwave UV light, though this has not been confirmed.

Thulium is more common than iodine on Earth, but it is hard to find and extremely expensive. One source for thulium, as well as other rare earth metals, is Metallium. It is sold in 1 gram, 5 gram and 25 gram sizes, as well as rods, ampoules, and coins. Metallium also takes custom orders. Thulium and its compounds may be occasionally found on eBay. Because the Th(III) ion color is hard to distinguish from other ions, other lanthanides or metals in general may be sold as thulium. This is a common problem with lanthanides, and online sellers.

Thullium should be stored in closed bottles, and kept away from moisture and any corrosive vapors, such as acids.