Distillation is a physical separation technique used in chemistry to separate a mixture of different chemicals in liquid form, based on their vapor pressure. The process works by vaporizing the separate components of a mixture, usually with use of a heat source, and condensing the components of the mixture, which can result in either an almost complete separation of the components or a partial separation where the concentration of a particular component is increased. A wide variety of distillation apparatus is used to conduct distillations in the laboratory. 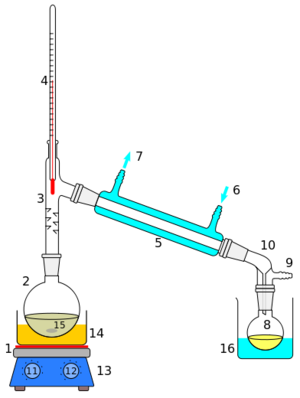 Distillation setup with a fractionating column

In simple distillation, a liquid is boiled and the vapor moves through the glassware (often consisting of a three-way distillation adapter) until it reaches the condenser; as it reaches the condenser, the temperature difference causes it to condense into a liquid and drip into the receiving flask. Simple distillation is used when the components being separated have a large boiling point difference, or when one simply wishes to separate a liquid from its dissolved solid components. 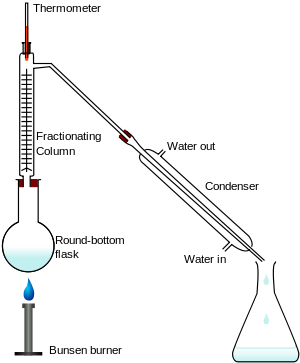 Distillation setup with a fractionating column

Fractional distillation is similar to simple distillation, but with the addition of a fractionating column to enable more efficient separation of the components. The fractionating column increases the surface area between the vapor and the outside atmosphere, making a very smooth temperature gradient which allows for separation of miscible mixtures solely by the difference in their boiling points. The ability to do a smooth fractional distillation makes obtaining a wide array of solvents considerably more economic, as easily-purchased mixed solvents can be separated into their components by this technique..

Vacuum distillation makes use of reduced pressure inside the distillation setup generated by a vacuum pump so that it is closer to the vapor pressure of the component, thus decreasing the amount of energy needed to vaporize the component. This is useful for isolation of heat sensitive components or components with prohibitively high boiling points. With a sufficient decrease in pressure, only a small amount of heat (or sometimes no external heat source) is required to achieve separation.

Steam distillations are useful for extracting essential oils from plant matter regardless of their boiling point. In this technique, the finely divided material containing the desired oil or chemical is held above boiling water within an apparatus such as a packed column or bulb, and hot steam is passed directly through the material. As the more volatile components leave the plant matter, they cling to steam particles and are carried through the condenser. The final product forms two separate layers, one of water and one of the hydrophobic essential oil.