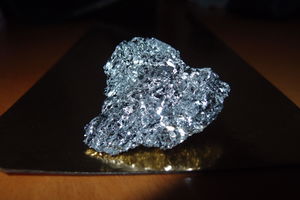 Antimony is a chemical element with symbol Sb (from Latin: stibium, though in many countries it's called stibium) and atomic number 51. It is a metalloid.

Antimony is stable in air at room temperature, but will burn in air to give antimony(III) oxide:

Antimony pentoxide (Sb4O10) cannot form by burning the element in open air, and is obtained by oxidizing antimony with concentrated nitric acid. Antimony also forms a mixed-valence oxide, antimony tetroxide (Sb2O4), which features both Sb(III) and Sb(V). Unlike the oxides of phosphorus and arsenic, antimony oxides are amphoteric, and do not form well-defined oxoacids and react with acids to form antimony salts.

Antimony is resistant to attack by most acids.

Antimony is a silvery gray metalloid. It has several allotrope forms:

Antimony is sold by various chemical suppliers and can also be found on eBay.

It can also be found in certain solders, as an alloy with tin.

Free antimony occurs in a few mines around the world.

Antimony can be extracted by reducing it's ore, stibnite (Sb2S3) with a reducing agent, such as iron. Carbon can also be used.

Antimony does not affect human and environmental health significantly. Inhalation of antimony trioxide (and similar poorly soluble Sb(III) dust particles such as antimony dust) is however considered harmful and suspected of causing cancer. Prolonged skin contact with antimony dust may cause dermatitis. Certain organometallic compounds of antimony may cause blisters on contact with unprotected skin.

Antimony should be stored in closed bottles, away from corrosive chemicals.

Antimony is best recycled. Antimony compounds should be reduced to antimony element or oxide and either recycled or taken to disposal centers.