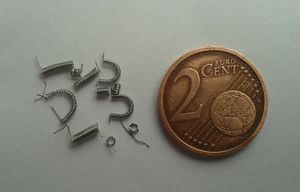 Tungsten, also known as wolfram, is a chemical element with the chemical symbol W and atomic number 74. It is a hard and heavy transitional metal. Main ore of Tungsten is wolframite. Tungsten in its elemental form is very rare,it was found only in very small quantities in Bol'shaya Pol'ya River, Subarctic Urals, Russia and On Luna 16 landing site, The Moon.

Elemental tungsten is resistant to oxygen, acid, and alkali attacks at standard conditions. At very high temperatures, tungsten will react with oxygen to produce tungsten trioxide, a dense yellow chemical compound. This can be done by accident when burning light bulbs are broken and their hot filament is exposed to atmospheric oxygen. The trioxide dissolves in aqueous alkaline solutions to form tungstate ions. Tungsten carbides (W2C and WC) are produced by heating powdered tungsten with carbon.

Tungsten reacts with fluorine gas at 350-400 °C to produce tungsten hexafluoride. This is one of the heaviest gas known, and it's sensitive to water, releasing hydrofluoric acid. It is mainly used in depositing extremely pure tungsten metal in chemical vapor deposition processes in semiconductor industry.

Alkali tungstates may be prepared in an electrolytic cell using tungsten as a cathode with an alkali metal hydroxide solution as an electrolyte.

Tungsten is a hard steel-grey metal, often brittle and hard to work in its raw form. However, when very pure, is malleable enough to be worked easily, though it's still very hard. It has the highest melting point of all the metals (3422°C) and second to carbon as the highest melting point of any pure element. Because of this property, it is very difficult to cast, and tungsten objects are often made instead by sintering. Tungsten has the highest tensile strength and lowest coefficient of thermal expansion of any pure metal. Tungsten's density, 19.25 g/cm3 is very close to that of pure gold (19.3 g/cm3), which, along with its other remarkable properties, allows it to be used in jewelry as an alternative to the precious metal.

Tungsten can be obtained from light bulbs, in the form of filaments. However one would need a very large quantity of light bulbs to obtain a few grams, even thought the metal itself is very dense. Tungsten powder can be bought from chemical suppliers, however one should be checking its composition carefully to avoid buying its carbide, as "tungsten powder" is sometimes short for "tungsten carbide powder". It can also be bought as bars as well as wire.

Tungsten metal can also be found in welding rods. Pure tungsten rods are rare but do exist. More often, however, they have small amounts of thorium or a rare earth metal in their composition.

Certain fishing weights are made of tungsten or tungsten alloyed with other heavy metals. These tend to be quite common in California, where tungsten is mined and lead products are sought to be replaced.

Elemental tungsten can be prepared by reducing its oxide with carbon or hydrogen. It can also be prepared via thermal decomposition of the hexafluoride or reducing it with hydrogen. The latter method produces a very pure metal.

Tungsten metal, being chemically resistant, is non-toxic. With a few exceptions, most tungsten compounds are relative non-toxic. Inhaled powdered tungsten carbide has been linked to fibrosis, so precautions should be used when working with WC objects.

No special storage is required for tungsten.

Tungsten compounds pose a threat to the environment, so it's best to dispose of them properly.