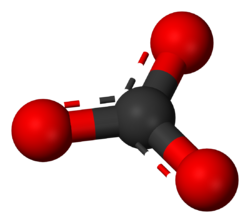 Carbonate is a polyatomic anion with the chemical formula CO32-. It also refers to any salt of carbonic acid.

The carbonate ion consists of a carbon atom bonded to three oxygen atoms with 2 electrons removed for a net charge of 2-.

The carbonate ion is one of the most commonly encountered ions. It is present in both inorganic and organic compounds. Most inorganic carbonates are insoluble, with the exception of the alkali carbonates and ammonium carbonate.

The singly protonated form of the carbonate ion, the bicarbonate ion, also exists, but is generally only confined to coexistence with alkali metal ions in the solid state. It coexists with carbonate and carbonic acid in solution.

The doubly protonated conjugate acid of the carbonate ion, carbonic acid, is unstable and spontaneously decomposes into water and carbon dioxide as follows:

Carbonates are often frequently unstable with heating, with many metal carbonates decomposing at high temperatures(sometimes quite low temperatures) to form a metal oxide and carbon dioxide, such as the simple conversion of copper(II) carbonate to copper(II) oxide.

Carbonates can be made by bubbling carbon dioxide in an alkali solution until the required pH. Can also be made through the pyrolysis of organic salts or biomatter, like wood. Keep in mind that the latter method will also produce lots of unburnt side products.