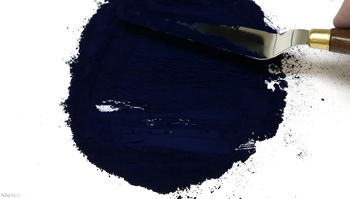 Prussian blue (also called CI 77510) is a complex salt of iron and hexacyanoferric acids, or a double salt of iron and potassium thereof. This compound comes in several forms, though they all are similar. While the formula C18Fe7N18 is often encountered, the compound doesn't have a definite formula or IUPAC name, because it is in fact several closely related compounds usually encountered together. It is used as a pigment.

Prussian blue is relatively inert under normal conditions. However, if heated to 200 degrees Celsius, it will decompose and liberate cyanogen gas (dangerous!). Stronger heating causes the cyanides themselves to decompose, nitrogen is liberated, leaving iron carbide and carbon in the test tube.

It is still commonly used as a pigment and can be bought in art stores, though in some places it's getting hard to find.

Here are several reactions that can be used to prepare Prussian blue of different types. They are notable in that they are used to detect ions of iron, not to specifically prepare the blue pigment.

"Standard", light blue Prussian blue can be precipitated with the following reaction:[1]

The "soluble" kind of Prussian blue can be prepared this way:

The dark blue variety called Turnbull's blue can be prepared this way:

Turnbull's blue only differs from normal Prussian blue in the parameters of its crystallization, resulting in a slightly different color. In all other aspects it is identical to standard Prussian blue. The presence of FeCl3 isn't mandatory, you will still get Turnbull's blue without it. However, in solutions of Fe(II) salts Fe (III) is usually present anyway.

Metal cyanides can also be used instead of ferro and ferricyanide.

All varieties of Prussian blue are safe under normal conditions. Contact with strong acids however should be avoided. Prussian blue may stain clothes and skin.

Prussian blue can be kept in any container, preferably a glass one, such as a jar.

Prussian blue is practically non-toxic, and can be discarded with common garbage. If you really want, you can neutralize it with bleach, though this is not necessary.