Sodium hypochlorite is a chemical compound with the formula NaClO. It is composed of a sodium cation (Na+) and a hypochlorite anion (ClO−); it may also be viewed as the sodium salt of hypochlorous acid. When dissolved in water it is commonly known as bleach or liquid bleach, and is frequently used as a disinfectant or a bleaching agent.

For a net reaction of: 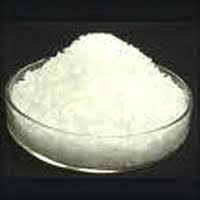 Pure sodium hypochlorite is it?

Solid sodium hypochlorite appears as a greenish-yellow solid (pentahydrate) crystals. In solution, it is usually a light green liquid with a sweet, chlorine smell.

Can be easily bought as "Household bleach" in a 3-8% solution. "Spill-less bleaches" contain a surfactant, rendering them useless for many chemistry endeavours.

It is prepared industrially by electrolysis with minimal separation between the anode and the cathode. The solution must be kept below 40 °C (by cooling coils) to prevent the undesired formation of sodium chlorate.

Hence, chlorine is simultaneously reduced and oxidized; this process is known as disproportionation.

Another route to produce sodium hypochlorite involves passing chlorine gas through a solution of sodium hydroxide, all the way to completion of the reaction, but this is not very efficient.

Commercial solutions always contain significant amounts of sodium chloride (common salt) as the main by-product, as seen in the equation above.

Open containers of sodium hypochlorite release chlorine gas over time, and the solution itself releases hazardous compounds upon reaction with many substances. As such, the addition of sodium hypochlorite to any other substance should be researched ahead of time or done in a controlled environment on a small scale; intentionally mixing chemicals without a knowledge of what will happen can be deadly if not carried out carefully. It should go without saying, but bleaching solutions containing sodium hypochlorite will bleach most clothing, so plan accordingly.

Sodium hypochlorite solutions should be stored in closed bottles, away from any chlorine corrosion susceptible materials.

Bleach solutions can be neutralized with hydrogen peroxide. Bisulfites, metabisulfites or thiosulfites can also be used.

NEVER USE ACIDS TO NEUTRALIZE BLEACH! The reaction releases chlorine gas which is highly toxic.