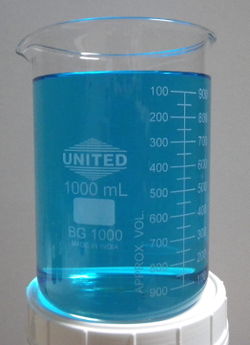 Beakers are simple cylindrical pieces of glassware used for holding and handling liquids.

The presence of a spout means that the beaker cannot have a lid. However, when in use, beakers may be covered by a watch glass to prevent contamination or loss of the contents, but allowing venting via the spout. Alternatively, a round-bottom flask may be used.

There are three main types of beakers:

Beakers can be bought from lab suppliers. They are sometimes found in hardware stores.

Beakers should not be used for boiling flammable liquids, as the flammable vapors can pose a serious fire hazard.