Borax or sodium borate, sodium tetraborate, is an important boron compound. It has the chemical formula Na2B4O7.

Sodium borate will react with a strong acid to release boric acid.

When borax is added to a flame, it gives a yellow-green color. Since the yellow flame of sodium is undesired, boric acid is used in fireworks instead of borax for green flame and as solution in methanol for pure green flames.

Borax is a prime material in the manufacturing of borosilicate glass. Unlike boric acid, it is not volatile and can be used in high temperature chemical reactions as a source of boron.

Borax is a white crystalline solid. It is odorless, and has an unpleasant taste. Borax melts at 743 °C and boils at 1,575 °C. It has a density of 1.73 g/cm3. Borax is poorly soluble in cold water, but it's solubility increases with temperature. It is soluble in some organic solvents, like ethylene glycol, glycerol, while moderate soluble in diethylene glycol, methanol. Borax is only slightly soluble in more common solvents like acetone, ethanol, ethyl acetate. 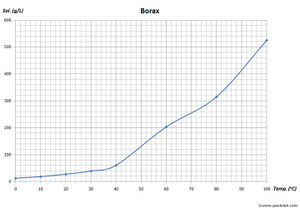 Borax is sold by various chemical suppliers. Can also be acquired online.

It is also sold in various pharmacies and iron forgeries.

Sodium borate can be made by reacting boric acid with sodium hydroxide, under continuous stirring.

Borax has low toxicity. It is only mildly irritant to skin.

Borax was added to the Substance of Very High Concern (SVHC) candidate list on 16 December 2010 in the EU.

Borax should be stored in closed bottles

Sodium tetraborate can be dumped in trash.