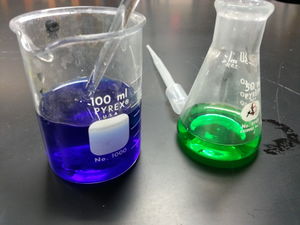 Copper is a reddish-pink metal that is highly malleable and ductile. It can take a high polish, but often appears dull. Older pieces may be coated with the black copper(II) oxide. It has extremely high conductance of both heat and electricity.

The softness of copper partly explains its high electrical conductivity (59.6×106 S/m) and high thermal conductivity, second highest among pure metals at room temperature (after silver). This is because the resistivity to electron transport in metals at room temperature originates primarily from scattering of electrons on thermal vibrations of the lattice, which are relatively weak in a soft metal. However, this is only true for a few soft metals.

Copper is notable for its varied chemistry. Copper metal will not dissolve in strong acids, but the addition of an oxidizer such as hydrogen peroxide permits the dissolution of the metal in most acids. Nitric acid is a sufficiently strong oxidizer to dissolve copper metal.

The nitric oxide produced may react with atmospheric oxygen to give nitrogen dioxide. With more concentrated nitric acid, nitrogen dioxide is produced directly in a reaction with 1:4 stoichiometry:

In both cases copper will exist in the +2 (cupric) state, the most common for copper. Compounds of copper(II) are generally blue or green in color.

When a sufficiently strong reducer, such as iodide, ascorbic acid or glucose, is used to oxidize copper 2+, it may enter the +1 (cuprous) state.

If excess HCl is added, a stable, soluble copper(I) complex is formed:

Copper(I) compounds are generally insoluble in water and highly reducing. Most of them are white, though copper(I) chloride may vary in color due to various impurities, and copper(I) oxide is red, or yellow when prepared by certain routes. 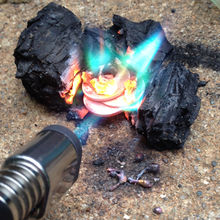 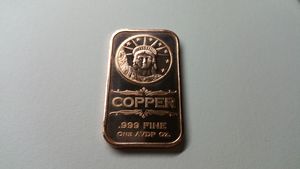 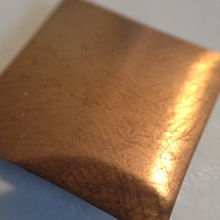 Copper metal poses little toxicity and clean copper metal items are known to have antiseptic properties, thought not as powerful as silver. As such, getting scratch by a fresh cut copper wire is less hazardous that if it was some other metal.

Recycling copper back to metallic form is easy: dissolve the copper(II) carbonate in a suitable acid, such as sulfuric acid, and then add in a reducing agent. Iron, zinc or aluminium are a good choice as they're cheap and available in large quantities. If aluminium is used, a chloride source should be added to promote replacement and break the protective Al2O3 layer.