Gold is very resistant to acid and alkali attacks and does not react with oxygen or halogens at standard conditions. However a mixture of hydrochloric acid and nitric acid known as aqua regia will dissolve gold.

Gold is unaffected by concentrated (40%) hydrofluoric acid at standard conditions.[2] 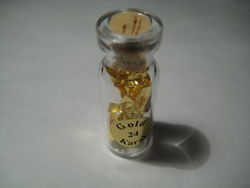