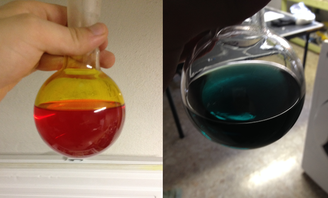 Left: Freshly prepared Jones reagent. Right: The end products, with the color of chromium(III) indicating completion of the reaction.

The Jones oxidation is a reaction in organic chemistry used to oxidize secondary alcohols to ketones or primary alcohols to aldehydes, sometimes further oxidizing the latter to carboxylic acids. The alcohol is acted upon by the Jones reagent, which consists of chromium trioxide or potassium dichromate dissolved in a mixture of acetone and dilute sulfuric acid. It is a powerful tool to the amateur chemist due to the ease of acquisition of the necessary materials, as well as the simplicity of the reaction and moderate cost.

The Jones oxidation is actually an oxidation of organic compounds by chromic acid formed in situ. It proceeds via by the formation of a chromate ester as an intermediate, similar to other esters produced from alcohols. Decomposition of the ester forms a carbonyl group in the new structure, corresponding to an aldehyde from a primary alcohol or a ketone from a secondary alcohol. An aldehyde may serve simply as an intermediate before being further oxidized to a carboxylic acid, if proper conditions are met. Thus, many equations are possible, some examples including:

The oxidation of methanol to formaldehyde:

The oxidation of isopropanol to acetone (this time using potassium dichromate):

The double oxidation of ethanol to acetic acid:

Though these are all stoichiometric equations, an excess of sulfuric acid, and usually an excess of either the alcohol or the chromium(VI) species, are used.

The reactions, while sometimes slow to start, proceed very rapidly and are very highly exothermic, so they are often done by slowly adding the alcohol into the Jones reagent with stirring, and on an ice bath. Acetone is usually the solvent of choice, but some Jones oxidations can be performed using only water as a solvent. A reflux condenser may be attached to prevent the escape of low-boiling species, such as acetaldehyde. The procedure for collecting the end product of the reaction varies widely depending on what has been obtained:

The inorganic product of the reaction contains chromium that has been reduced to the +3 oxidation state. The reaction products seen are most often green in color, alluding the formation of a chromium(III) aquo complex, but if the reaction mixture is kept sufficiently cool (below about 40 °C), the end product will instead be a blue to blue-violet color. Following a reaction that used chromium trioxide, the mixture can be evaporated to yield chromium(III) sulfate, but if potassium dichromate was used instead, chrome alum will crystallize out. Because of this, the Jones oxidation can be used instead as a tool for inorganic chemistry, making use of ethanol or another alcohol solely as a reducing agent for hexavalent chromium.

The Jones oxidation is not inherently selective in producing aldehydes alone from primary alcohols. A work-around may be to drip Jones reagent into a large excess of the alcohol, while distilling out the aldehyde, if possible.Certain reaction conditions may help prevent the further oxidation of aldehydes produced, but as of yet literature appears to be vague on the subject.