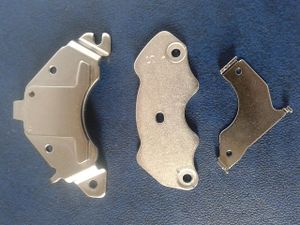 Mu-metal, also known as Mu metal or Mumetal is a nickel–iron soft magnetic alloy with very high permeability widely used for shielding sensitive electronic equipment against magnetic fields. The name of the alloy comes from the Greek letter mu (μ), which the symbol for magnetic permeability.

The alloy is sold under various trade names, such as MuMETAL, Mumetall, and Mumetal2.

The alloy has several compositions, the most common being 77% nickel, 16% iron, 5% copper and 2% chromium or molybdenum. Other types include ASTM A753 Alloy 4 which consists of 80% nickel, 12 to 15% iron, 5% molybdenum and other elements such as silicon.

Mu-metal is resistant to corrosion, though acids will slowly dissolve it in the presence of oxygen.

Mu-metal is commonly encountered in the form of HDD magnet brackets. Old hard drives tend to have big brackets, while those from smaller hard drives, like those used on laptops are much thinner and smaller.

Other sources of Mumetal are old submarine cables and cathode ray tube brackets.

An important note to anyone looking to extract the nickel from hard drive magnet brackets: not all of them are made of this alloy or even other nickel alloys. Some, as noted by a few SM members are actually iron alloys, probably used because they're cheaper or have similar magnetic permeability. SM user VSEPR_VOID managed to dissolve a hard drive magnet bracket in acid, but he was unable to detect any nickel metal, and instead he determined that the said bracket is made of an iron alloy, which further confirms that not all magnet brackets are made of Mu-metal.[1]

Mu-metal is relative inert, but due to its high nickel content, it may cause dermatitis to some people.

No special storage is required, as the alloy is relative inert to most reagents. Mu-metal should be kept in closed containers.