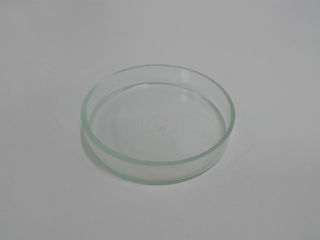 A Petri dish (also called Petrie Dish, Petri plate or cell-culture dish), is a shallow cylindrical or disc-shaped glass or plastic lidded dish used by biologists or biochemists to culture cells, such as bacteria, fungi or small plants.

Petri dishes are disc-shaped objects, made of plastic (PE or polystyrene) or glass (borosilicate). They appear like two glass plates with short walls, which can be thin or thick, depending on their use.

Petri dishes can be bought online or from lab suppliers.

You can use disc containers, like those used for holding old tape or creams as makeshift Petri dishes. Just make sure to sterilize them properly before use.