Chromium(III) oxide reacts with acids to form chromium(III) salts, though samples that have been heavily annealed at high temperature, such as commercial varieties, are not readily attacked by acids or bases. Molten alkalis react with chromium(III) oxide to form chromates or chromites. Molten potassium nitrate reacts with it to form potassium dichromate, though indurated chromia reacts very slowly. Chromium(III) oxide can be used to produce a low-energy thermite with aluminum or magnesium powder, which is difficult to ignite. It can catalyze the oxidation of ammonia to nitric oxide when heated to red heat and put into a flask of ammonia gas.

Chromium(III) oxide is a dark green powder and is slightly hygroscopic. It turns brown when heated, but reverts to its dark green color when cooled. 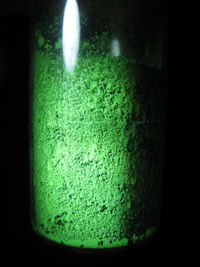 Chrome green is available at pottery shops as a green pigment, sometimes with traces of calcium carbonate. This material, however, is generally too unreactive to produce other chromium compounds.

Purer chromium(III) oxide can be purchased from chemical suppliers.

Chromium(III) oxide can be prepared by reducing potassium dichromate with sulfur:

It can also be prepared from the thermal decomposition of ammonium dichromate:

or by reacting chromium trioxide with ethanol.

It is the most common byproduct of the reduction of chromium(VI) compounds, especially in neutral solution.

Chromium(III) oxide is not extremely reactive. If ingested it may cause nausea, vomiting and diarrhea. As it stains, gloves and protective clothing should be worn.

Chromia doesn't require any special storage. Can be kept in any clean bottle.

While not as toxic as chromium(VI) compounds, it's best to avoid dumping it in the environment.