Ethanol or ethyl alcohol, is a primary alcohol with the formula CH3CH2OH. It is more commonly known as drinking alcohol or simply alcohol, and solutions of it with water are the basis of all alcoholic beverages. It is an easily obtained and produced laboratory solvent, as well as a common reagent in organic chemistry.

Ethanol is a primary, straight-chain alcohol. It is often employed as a solvent in the laboratory setting, but also has an enormous variety of uses as a reagent.

It reacts with sodium and some other metals, notably other alkali metals, to form ethoxides. The preparation of aluminium triethoxide in this way is possible using iodine and mercury(II) chloride in tiny amounts as a catalyst.

Ethanol can be oxidized using potassium dichromate in acidic conditions to acetaldehyde, which can be further oxidized to acetic acid if conditions are cold enough to prevent the acetaldehyde from boiling off. Acetaldehyde can also be produced from ethanol in two less costly manners, though special apparatus are necessary. The first is the oxidation of ethanol by oxygen over a silver or copper catalyst upwards of 500 °C, but the reaction is exothermic and self-sustaining as long as oxygen is sufficiently present, even in the concentrations of normal air. The other method is by the dehydrogenation of ethanol over a copper catalyst without a need for oxygen. This route does not require oxygen to proceed, and takes place at a more reasonable temperature of 260–290 °C, but is endothermic and requires constant heating. The conditions necessary for either of these catalytic routes can be achieved by passing the ethanol in vapor form through a heated tube of fused quartz containing the catalyst.

Ethanol can also be oxidized to acetic acid using potassium permanganate in basic conditions, causing immediate neutralization of the acetic acid to form a salt. A third and final route to acetic acid from ethanol involved the biochemical process of anaerobic fermentation by acetic acid bacteria, as is done industrially to produce vinegar.

Due to being a widely available primary alcohol, ethanol is desirable for producing esters via Fischer esterification by refluxing it with a carboxylic acid in dehydrating conditions.

Ethanol is a clear, volatile, sweet smelling liquid which boils at 78 °C. Ethanol has a density of 0.789 g/cm3 and is miscible with water, as well as most organic solvents. Ethanol forms an azeotrope with water at 95.6% and solutions with higher concentrations of ethanol than this are aggressively hygroscopic. The drying of ethanol can be accomplished using 3A molecular sieves, desiccants, or by salting out using potassium carbonate. Calcium oxide can also be used. Ethanol, like most other alcohols, is highly flammable, even in low concentrations in solution, although at low concentrations the flash point increases.

40% ethanol water solutions are available at most liquor stores as clear vodka, but one must be of a legal age (21 in the US) to purchase this. 90-95% ethanol is available as Everclear in liquor stores in some places. In 14 US states, the sale of Everclear is restricted. Highly concentrated ethanol is also available as rectified spirits, with a maximum concentration of 96% (95.6% to be exact). Some rectified spirits tend to have traces of phenolphthalein or other chemical agents added to limit overdrinking, and if these can interfere with any intended reactions, the ethanol must be distilled to remove them. Rectified spirits are available as food grade in many countries (Finland, Hungary, Poland, Romania e.g.), and certain US states, though they're often quite expensive, in some cases $26/L. Highly concentrated ethanol can also be sold as a disinfectant (the so-called "medical grade" ethanol), usually mixed with isopropanol; it may or may not qualify as food grade, depending on the country.

Methylated spirits or denatured alcohol vary greatly by geography and brand, but usually contain some proportion of ethanol and methanol, typically with ethanol making up the greater share. These products may also contain methyl ethyl ketone to render it unsuitable to drink. Ethanol for industrial use is denatured to make sure no-one drinks it, meaning it is cheaper as it gets around the alcohol tax and is available to be sold to minors. Denaturing or bittering agents include denatonium benzoate and pyridine, which both give the alcohol a very foul bitter taste.

Some camp fuel/biofuels consist of ethanol, with small traces of methanol added for denaturation. Other combinations may contain isopropanol, glycerol or oil.

Distillation of ethanol, even for scientific purposes and purification, is considered illegal in some places, though often a permit can be obtained allowing this. 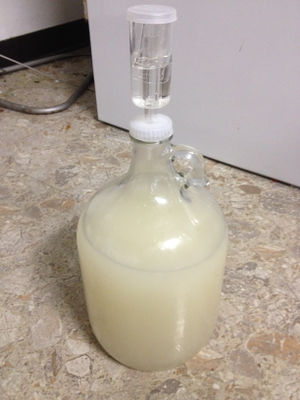 One gallon of home-brewed alcohol made from sugar. Seven days after the start of fermentation, it contains 20% ethanol and is ready for distillation.

Preparation of ethanol for lab use is generally through fermentation of a sugar(granulated table sugar works fine) using yeast, specifically high alcohol tolerance, fast-fermenting yeast used for this purpose. In order to promote fermentation rather than yeast growth, the mixture must be placed in a container with an airlock to allow carbon dioxide to escape but no oxygen to get in. This process usually can only produce solutions that are 20% ethanol, possibly along with other products, such as methanol or acetone, that need to be removed. If you use pure sucrose (refined cane or beet sugar) for brewing your ethanol, you are safe from methanol contamination; however, pectin and certain other carbs present in fruit do produce methanol when they are fermented, so fruit mashes require special precautions in distillation.

By carefully distilling the mixture after it has been sufficiently fermented, the 96% ethanol, 4% water by-volume azeotrope can be obtained.To prepare pure ethanol from a mixture of ethanol and water, salting out can be used, in which potassium carbonate is dissolved in the mixture, causing 2 separate layers to form. The ethanol layer can be removed from the top and distilled in a water-free environment; or it can be cooled below 0° C to precipitate most impurities out, if distillation is not an option.

If homebrewing ethanol is not an attractive route, it can be distilled from store-bought spirits such as vodka or gin, which are often about 40% ethanol by volume. It is important to keep in mind that the distillation of ethanol is illegal in many jurisdictions without a permit, and perhaps equally important to note that ethanol produced in this manner, especially using lab glassware, is not safe to consume. Distilling safe, consumable ethanol is a whole art and craft called moonshining, and you need to learn this skill and obtain or design special distilling apparata if you want to synthesize food-grade ethanol. Consult your lawyer to learn if this practice is legal where you live; in some jurisdictions moonshining is a legal craft if no profit is made on it, and in some it is wholly illegal.

Ethanol consumed in small amounts on occasion is not particularly dangerous, but very large amounts are immediately dangerous to the body, while moderate to large amounts over a long period can lead to liver damage. It can be addictive, and it is unusual among drugs in that its withdrawal symptoms can kill Ingestion of small amounts of ethanol will cause drunkenness, which inhibits reaction times and judgment. It should be noted that ethanol produced in a lab is NOT fit for consumption, especially given the risk of contamination by methanol, which breaks down into formic acid in the body, potentially causing blindness or death. Always keep your kitchen ethanol still separate from your lab, do not use it for distilling non-food-grade chemicals, and learn the art of moonshining, which includes the techniques for brewing and distilling safe, potable liquor which is not contaminated with methanol or other toxicants. Learn to use the techniques of fractional distillation, multi-stage distillation and rectification which are all useful in getting rid of foreshots and feints which contain toxicants.

Distillation of alcohol is illegal without a permit in many jurisdictions, and therefore homebrewing ethanol may not be an option to produce suitable quality ethanol for lab use.

Ethanol should be stored in closed plastic or glass bottles, away from any fire source or oxidizers. It is slightly hygroscopic, forming an azeotrope with water at 95.6%. If pure ethanol is required, it can be dried with a strong desiccant, such as molecular sieves.

For most synthesis and procedures, anhydrous ethanol is not always required, and azeotropic ethanol is sufficient. However, for reactions where the presence of water is undesired, you can get anhydrous ethanol by drying it using fresh molecular sieves or metallic sodium, then distill the ethanol under dry or inert conditions. Collect the dry ethanol in a ground glass joint glass flask, like a round bottom flask and seal it using a well greased plug or stopcock.

Ethanol can be safely burned. It is in fact a fuel commonly used in laboratory burners (spirit lamps). It is not advised to dispose of burnable ethanol unless it is contaminated by something toxic which is not destroyed during burning; even if it's mildly contaminated with methanol it is still safe to use in a spirit burner. Put it to good use.