Disulfur dichloride reacts with water to form sulfur dioxide and hydrochloric acid, so an open container will produce thick white fumes as it reacts with moisture in the air.

Due to air instability and pressure build-up from decomposition to the monochloride, sulfur dichloride is generally not sold to individuals, and has to be made in situ. 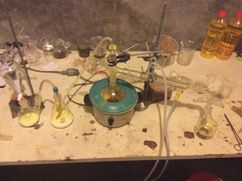 Reaction with water destroys the compound, and this can be effective if done outside or in an area capable of safely removing the sulfur dioxide. Aqueous sodium hydroxide solutions can also be used. Calcium hydroxide suspension is also a good choice. Be careful to only add the compound dropwise in a large amount of neutralizing solution.