Nitrocellulose, also known as cellulose nitrate, guncotton and NC, is the nitrate ester of cellulose. It has the property of burning very rapidly, almost in a flash, leaving little to no ashes behind. Nitrocellulose can be nitrated to various degrees. As it consists of long chains of nitrated glucose units, its nitrogen content rather than a number of nitro groups per molecule is usually used to describe quality. The theoretical maximum is 14.15% N, which corresponds to three nitro groups per glucose unit.

Nitrocellulose will burn when ignited.

Nitrocellulose is a white or yellowish solid compound, soluble in many organic solvents, such as ethanol, isopropanol, ether.

Nitrocellulose can be found in ping pong balls, as its dinitrate form mixed with camphor, in a 75:25 ratio. It can be extracted with acetone, though this process is complex and requires lots of ping pong balls.

The first celluloid films, aka "nitrate films" are also made of nitrocellulose, but are no longer manufactured and unless they're very degraded it's a waste to destroy them, as they're valuable on their own.

Flash paper and flash cotton are made of very pure nitrocellulose and can be cheaply bought from any magician props suppliers/stores.

An interesting method of extracting nitrocellulose from various gunpowders have been described, where the the powder is washed with six times with three different solvents, three times with methanol, one with dichloromethane, again with methanol and a final one with water.[1]

Nitrocellulose membranes are used in molecular biology for Western blotting. This is not likely to be a cost effective source, but may be a pleasant surprise in e.g. a lot of lab supplies off eBay. 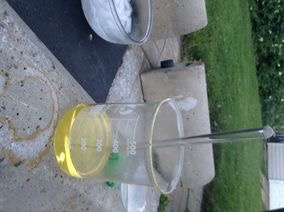 Nitrocellulose is produced via the nitration of a source of cellulose, such as cotton. A synthesis of this procedure can be found here.

Burning test of the resulted NC can be seen in the video gallery below.

Nitrocellulose with a high nitrogen content (above 13% N) is a moderately powerful explosive. It is rarely used as an explosive in its pure form however. It is more common as a gelling agent for nitroglycerin and ethylene glycol dinitrate in the production of blasting gelatin.

Nitrocellulose is also used in pyrotechnics and by magicians as a special effect. Small samples of good quality nitrocellulose can be burned in one's bare hands without causing burns, thanks to its high burn rate and absence of solid residue.

Dry nitrocellulose is a powerful low explosive and is very easily ignited. While pure, clean nitrocellulose is mostly stable and can be safely handled, nitrocellulose that contains remaining traces of acid is very unstable and may spontaneously combust in air. It should be handled and treated with great care as with other explosives. While not as immediately dangerous as pieces of guncotton, solutions of nitrocellulose in a solvent and dry lacquers are very flammable, and should be kept away from all open flames and heat sources.

When the temperature is increased to 160-170ºC and above, it will spontaneously ignite without an external spark or flame.[2]

Nitrocellulose and nitrocellulose solutions should be stored away from any ignition source, preferably in a separate fire-proof cabinet. NC fires are notoriously hard to extinguish and can even continue to burn after being submerged underwater, as they don't require atmospheric oxygen to continue burning.

Nitrocellulose can neutralized by heating it.