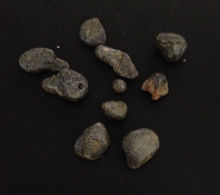 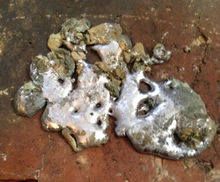 Lead is a chemical element with symbol Pb and atomic number 82. It is a very heavy and dense metal with a variety of uses, and is well-known for its toxicity.

Freshly cut lead will oxidize in air. Lead compounds span a wide range of colors, and the pigments white lead, red lead, and chrome yellow are all derived from it. Solutions can be tested for lead by adding a few drops of potassium iodide solution, which forms a bright yellow precipitate of lead(II) iodide. Sodium sulfide can also be used, precipitating black lead sulfide.

Lead is a soft, malleable, and dense post-transition metal. Metallic lead has a bluish-silver color after being freshly cut, but it soon tarnishes to a dull grayish color when exposed to air. Lead has one of the lowest thermal and electrical conductivity of all metals. It is usually quickly identified by its high density and rather low melting point at 327 degrees Celsius.

Lead is available for sale as bars or ingots, in various purities. Oftentimes it is alloyed with antimony for hardness. Dissolving this alloyed lead in nitric acid will remove the antimony, as it precipitates as white antimony(III) oxide while the lead goes into solution. Certain wheels weights are made of lead or lead-antimony alloy (those of purer lead are very soft).

Lead-acid batteries, such as those used in cars, contain lead and lead oxide. Extracting the lead from these batteries is not easy, and it's quite a dangerous method. You will need to remove any leftover electrolyte, then rip apart the outer plastic coating, which is very tough, then rip apart the lead plates from their cells. During this process, the plates may short, which can be dangerous is flammable gasses are generated from the battery. After removing the lead plates, heat them with a blowtorch in a metal can to melt away the lead from them, then recast the lead to remove any impurities.[1][2]

Many items made in the earlier 20th century are a good source of lead, either pure or as alloy: old water pipes are a good bulk source; some car battery cable contacts were made of lead; very old hard drives tend to have counterweights made of lead; solders contain lead-tin alloy; scuba diving weight belts. The standard firearm bullets and shotgun pellets are also made of lead. Finally, lead fishing weights are widely available in outdoor or department stores. Round lead seals, used for sealing various electronic terminals, are also a good source of lead. You can occasionally find them on the ground, most often in the dirt around railway and phone control cabinets or electrical transformer stations.

Lead can be prepared by reducing one of its oxides with lead sulfide or from soluble lead ions via electrowinning.

While lead is resistant to chemical attacks, it will rapidly oxidize into compounds that are extremely toxic to living beings. Lead poisoning is one of the most studied form of heavy metal poisoning in medicine and the nasty effects are well understood. It is not absolutely necessary to wear gloves while handling pieces of the metal, as long as hands are washed thoroughly after handling it. Lead in the metallic form is not absorbed through the skin at all. Soluble lead compounds, however, require more protection, and organolead compounds are the most dangerous as they are far more bioavailable and easily absorbed than any other source of lead. Because of its low melting point, lead is sometimes a popular use in home casting, although this has become less popular due to its toxicity. Contrary to popular belief, lead does not fume much when it is melted. At the temperatures that lead melts at, its vapor pressure is highly insignificant. Because of this, it is not necessary to wear a respirator while melting lead, though it is very necessary when working with lead dust, as this can be inhaled and absorbed through the lungs. It is not recommended to heat lead much higher than its melting point, as this may cause it to fume.

Most lead compounds are poorly soluble in water, but lead(II) acetate and lead(II) nitrate are quite soluble and therefore are very toxic.

Since it does not form volatile compounds under standard conditions, it's not necessary to be stored in special containers. To prevent it from oxidizing, lead may be stored in a closed bottle under inert atmosphere, carbon dioxide is best. It's recommended to avoid storing it underwater or in any other liquids, as it will slowly oxidize, since there is some oxygen dissolved in liquid, and some lead oxide may flake off and contaminate the liquid.

Lead alloys, like Pb-Sb resist oxidation and can remain relative lustrous for months up to one year, as long as they're kept in a place with low humidity and no corrosive vapors are present in the storage place.

Lead scraps can be taken to metal recycling facilities. Scraps of metal can also be collected and re-cast into fresh pieces. Lead compounds should be converted to insoluble forms, before being taken to a hazardous waste facility.