Iodine is the element with the symbol I and atomic number 53. It is a reactive halogen which is volatile and has many uses in inorganic and organic chemistry.

Unlike the other halogens, iodine is solid at standard conditions and does not sublime rapidly, thus can be handled much safer. 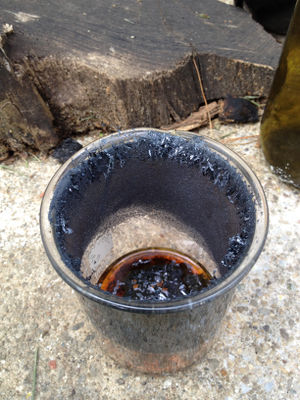 Metallic crystals of iodine encrusting the inside of a beaker.

Iodine can be seen in the form of royal dark purple crystals, or in a gas in a lighter color. It is most commonly found as a silvery metallic looking chemical. Iodine, like other halogens, has its own unique smell, somewhat similar to chlorine, or described as being "clean". Contrary to some sources, iodine will melt if heated, though it tends to sublime a lot. This can be done very easy by using high heat or hot concentrated sulfuric acid.

Iodine is not very soluble in water, but is very soluble in a solution of sodium or potassium iodide in water. When dissolved like this, the solution has a color from light yellow to dark orange, to almost black brown. This change in color and solubility is due to the formation of the triiodide(I3-) ion. If reacted while in water with a sufficient reducing agent, such as phosphorus or hydrogen sulfide, iodine is converted to hydrogen iodide, which dissolves in solution as hydroiodic acid. Iodine possesses some metallic properties, despite being a Halogen. 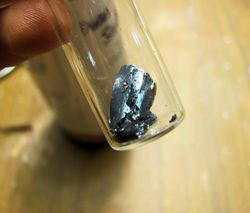 Elemental iodine is sold by chemical suppliers, but it's not easy to get hold of.

Iodine is best extracted from iodine tinctures, though you will need large amounts of such tincture to obtain useful amounts of iodine. Iodine can be isolated by acidifying a soluble iodide (I-) solution to form hydroiodic acid, adding an oxidizing agent like hydrogen peroxide to precipitate insoluble iodine, and purifying by sublimation. Adding concentrated sulfuric acid or nitric acid will produce iodine directly. Wet iodine can be dried by melting under concentrated sulfuric acid.

Another convenient source of iodine is seaweed, which contains a few percentages of iodine. To extract the iodine, you will need lots of dry seaweed, a few kg minimum. Old seaweed mattresses tend to be a good source. You can also collect it directly from beaches if it's permitted (check the local law before you do anything). Dry the seaweed then burn it in a container until it turns into ash. Add some water to the seaweed ash, then filter the suspension to separate the soluble part, which includes the iodine. Concentrate the solution until it crystals begin to form. To extract the iodine simply add conc. sulfuric acid, followed by conc. hydrogen peroxide. Dry and purify the resulting iodine. Keep in mind that seaweed also contains bromine and lots of chlorine (from sodium bromide and sodium chloride aka sea salt) and this may contaminate you iodine.[1]

Iodine is not easily purchased in the United States and other countries that tightly control drug precursors, as iodine is often used in the clandestine manufacture of methamphetamine.

Iodine is a controlled substance in many countries due to its use in producing illicit drugs, and while possession of iodine itself may not be a crime, its presence in a lab may be used to build a case against an innocent amateur chemist.

However, in most countries elemental iodine can be purchased freely, with no restrictions.

Iodine, like other halogens, is toxic in large quantities and its vapors should not be inhaled. Objects stained with iodine solution or with solid iodine on them should not be brought inside or left out, as any iodine will sublimate given time. Iodine stains can be cleaned with a solution of sodium thiosulfate.

Iodine is corrosive to most common metals, which is why it should only be handled with glass or plastic tools.

Elemental iodine is very difficult to store properly, as it tends to sublime at ambient temperatures and its vapors will escape the storage bottle, and stain the environment where it's stored. Sealing the bottle with parafilm or teflon tape will reduce the escaping iodine vapors. Do NOT use aluminium or any other metal foil, as it will corrode.

A more permanent way is to store the iodine in a sealed glass ampoule.

Iodine can be neutralized by reacting it with a reducing agent, like sodium or potassium thiosulfate.