Trichloromethane, or chloroform, is a chemical compound with the formula CHCl3. It is one of many examples of a haloalkane, and is often used as a nonpolar solvent in organic chemistry.

Chloroform vapor slowly reacts with oxygen in the presence of light to generate phosgene, a highly toxic gas with a smell similar to freshly-cut grass. For this reason, chloroform is usually stored in opaque or amber glass bottles with little headroom at the top. Ethanol is frequently added to neutralize any phosgene formed, which results in the accumulation of hydrochloric acid in the chloroform. For this reason, chloroform is often washed with sodium bicarbonate and redistilled before use after storage.

Chloroform will react with sodium hydroxide to yield the intermediary dichlorocarbene, sodium chloride and water.

Dichlorocarbene is unstable in these conditions and will react with additional sodium hydroxide to yield potentially useful sodium formate in a process which is best aided by a phase transfer catalyst such as ethanol:

Chloroform can be reduced with hydrochloric acid and zinc metal in ethanol to dichloromethane.

Chloroform will react with water vapor at high temperatures to generate hydrochloric acid and carbon monoxide.

At room temperature, chloroform is a transparent, volatile, non-polar dense liquid with a characteristic sweet odor similar to other halomethanes. It has a low solubility in water but is miscible with most organic solvents. Chloroform and other chlorinated organic solvents are particularly useful as solvents for highly reactive oxidizing agents, such as elemental bromine or chromyl chloride. Chloroform is also often used as a solvent for biological extracts, such as alkaloids from various plants, including caffeine, and even RNA or proteins.

Chloroform is used in many acrylic glues. However its use in many OTC products has declined over the years, and has been replaced with its less toxic dichloromethane.

Chloroform can be purchased from chemical suppliers. 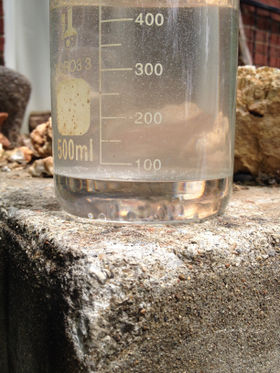 Reaction mixture after performing the haloform reaction, with chloroform forming a separate layer on the bottom. Note the high index of refraction of chloroform.

Since being removed from the shelves of most stores due to its danger and negative image in the media, chloroform typically must be produced in the lab. The most convenient and easily accessible method is the haloform reaction. To make chloroform by way of this method, one mole of acetone is added to every three moles of sodium hypochlorite in solution, and the resulting mixture is shaken and given ample time to fully react, producing chloroform and sodium hydroxide, among other substances. The reaction is extremely exothermic and can easily run away; for this reason it is advised that the reagents are kept as cold as possible (frozen sodium hypochlorite is recommended) before being combined, and that the reaction is done outside or in a fume hood. Two or more hours are required before the reaction has fully completed, but if the mixture is left to sit for too long, the chloroform is slowly eliminated by aqueous sodium hydroxide produced in the reaction. When complete, the reaction vessel contains a layer of crude chloroform on the bottom; this layer should be extracted, dried to remove water, and distilled to collect the final product, which is then stabilized with ethanol and stored in an opaque or amber glass container. Because non-negligible amounts of chloroform are soluble in water, the yield of this process is increased by using higher concentrations of hypochlorite. Solubility of chloroform in water can also be reduced by saturating the aqueous solution with sodium chloride.

The haloform reaction can also be done using ethanol instead of acetone, and a route using isopropanol may also exist.

Trichloromethane finds extensive uses in the home lab as a general non-polar solvent, and is particularly well-known for its use in extracting alkaloids and other biological compounds, such as caffeine and piperine, from their natural sources. Chloroform is unique among non-polar solvents for being non-flammable, enabling its use in settings that would be less than safe for solvents such as diethyl ether.

The distinctively sweet-smelling compound chlorobutanol is easily produced from acetone and chloroform. The major industrial use of chloroform, however, is in the production of chlorodifluoromethane, a precursor in the manufacture of polytetrafluoroethylene (PTFE), or Teflon.

Chloroform can also be used to make dichloromethane and methane. DCM can be prepared by reducing chloroform with hydrochloric acid and zinc metal in ethanol.

If the pH of the solution is neutral, then methane will be formed, and not DCM.

Chloroform can also be a very useful reagent for non-chemical purposes. Because it selectively dissolves certain plastics, such as acrylic, it can be used to create resins and glues for repairing or attaching plastic objects.

Chloroform presents numerous hazards to the inexperienced chemist, but all of these dangers can be overcome by following simple guidelines. Chloroform on its own acts as a potent central nervous system depressant, and can, given enough time, cause loss of consciousness. Higher doses during an extended time can cause death in this manner. It is also a suspected carcinogen.

Sodium metal and chloroform can detonate when subject to slight shock. The resulting explosion may be very violent and dangerous.[3][4]

Chloroform should be stored in closed amber bottles, away from any heat or light source. If stored improperly, there is the risk of forming phosgene upon prolonged contact with oxygen or sunlight. It is highly recommended that all samples of chloroform are stabilized with at least one percent ethanol, stored in well-sealed, dark amber glass bottles, and are not stored for extended periods of time without periodic ventilation. Phosgene is colorless and bears an odor resembling freshly-cut grass, which is not in any way an adequate warning of its presence, therefore it is dire that chloroform is handled and stored in the proper manner.

Testing for phosgene can be done with a strip of filter paper that has been soaked in an alcoholic solution of 5% diphenylamine, and 5% dimethylaminobenzaldehyde and then dried. The paper will turn yellow if any phosgene is present.

Chloroform can enter the water supply and may not be adequately removed during treatment procedures, and thus poses a significant threat to the public when it does; for this reason, chloroform should NEVER be disposed of in a sink or drain. A more acceptable way to dispose of chloroform is to first treat it with aqueous sodium hydroxide over a long period, which gradually converts chloroform to dichlorocarbene. Atmospheric chloroform is significantly less of a hazard, so boiling it off after its use as a solvent is acceptable, as long as there is a small quantity and in an open area, otherwise the chloroform vapors may corrode wall paint, certain plastics and rubber.

Chloroform can also be destroyed with Fenton's reagent. Since some chloroform will aerosolize, it's best to do this either outside or in a fumehood. Add the chloroform dropwise.

Another way to neutralize chloroform in by carefully reducing it with zinc metal and water, in an ethanol medium, at neutral pH. This yields methane and zinc chloride.

Iron can also be used.