Glassware is the general term for all vessels and other equipment used in the lab that are made of glass. Glass is usually preferred to other materials for general lab purposes because it does not react with most chemicals, and is durable and easy to clean. Only a few chemicals are able to eat through glassware, including alkali metal hydroxides, such as sodium hydroxide, and certain acids such as hydrofluoric acid (HF) and hot phosphoric acid (H3PO4), as well as some fluorine compounds, like fluorine interhalogens. There are different types of glass that can be used for making lab glassware that are good for different purposes.

Glassware comes in many different shapes and sizes to serve various purposes around the lab.

Beakers are simple cylindrical pieces of glassware used for holding liquids. They are usually roughly graduated, but these graduations should not be used for precise measuring, only to give a general idea of the volume contained in the beaker. They will also usually have a pouring spout to ease pouring from them into another container. Beakers generally come in sizes such as 25, 50, 100, 150, 250, 600, 1000, and 2000mL. For the average amateur chemist, it is good to have several 100 and 250mL beakers, along with a 600mL one, although all of the sizes can be useful in different situations. If it is necessary to close a beaker to prevent evaporation of contents, a watch glass of the proper size may be placed over the top, although this will not close it completely due to the pour spout. A beaker may be heated on a hot plate, but it is necessary to place a piece of ceramic coated wire gauze between it and the hot plate to evenly distribute the heat, preventing it from failing. 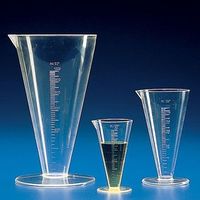 A conical measure is a type of laboratory glassware which consists of a conical cup with a notch on the top to allow for the easy pouring of liquids, and graduated markings on the side to allow easy and accurate measurement of volumes of liquid. While not as precise as graduated cylinders, conical measures are often used by pharmacists when compounding.

A bottle with a ground glass joint that allows liquids or solutions to be poured dropwise.

Erlenmeyer flasks are cone shaped pieces of glassware with vertical necks. They are generally more expensive than beakers, but also have several benefits in some situations. For one, it is easier to swirl the contents of one without spilling them because of the flask's shape. They can also be heated in the same manner as beakers, using a wire gauze on a hot plate, but they retain the solvent better because of the sloped sides. Gravity filtration into an Erlenmeyer flask is very simple, since the narrow neck of the flask can support the funnel, while a support stand would be required when filtering into a beaker. Additionally, they can be closed much more easily than beakers, particularly if they are compatible with ground glass stoppers, as some are. It is also possible to attach flasks with ground glass joints to more complex apparatuses. There is also a wide-mouthed variety, in which the vertical neck is proportionally wider than in a normal flask. Erlenmeyer flasks come in the same size range as beakers.

Used to recrystallize compounds from solution.

The Florence flask is an alternate type of boiling flask very similar to the round-bottom flask, with the exception that it has a flat bottom. This can be advantageous since it makes it much easier to heat using a hot plate, and it can be set down on a surface without falling over.

Used when pouring liquids or powders/granules in flasks/bottles with a narrow opening, or when filtering.

Graduated cylinders are great for accurately measuring liquids. They are tall, narrow glass tubes with many graduations, usually by mL, but on the smaller ones by tenths of mL. Usually they have a flared base allowing them to stand up on their own. Although they are not as accurate as volumetric flasks, they have a much larger number of uses because of their wide range of graduations. Conical graduated cylinders, also known as conical measures, are occasionally found in pharmacies and are good for working with viscous liquids.

Round-bottom flasks are are usually used in conjunction with other pieces of glassware, particularly in reflux or distillation setups. Because of their round bottom, they must be held in place with a clamp during use and placed on a cork ring for storage. The best way to heat a round-bottom flask is with a heating mantle, although they may also be heated using a hot plate or a Bunsen burner in a water, oil, or sand bath. It is also possible to heat them directly with a Bunsen burner with a piece of ceramic coated wire gauze held to the bottom of the flask to prevent contact with the flame. When boiling something in a round-bottom flask, particularly when it isn't connected to anything, make sure to use boiling chips to keep a steady boil, because otherwise the contents may suddenly flash-boil and shoot out the top of the flask. Round-bottom flasks are available in several variations. The majority of them have ground glass joints so that they may be connected to a larger apparatus, although some do not. These flasks are also available in two and three necked varieties to allow more complex setups, and for the insertion of instruments such as thermometers.

Test tubes are one of the cheapest and most useful types of laboratory glassware. They are long, narrow, generally small, ungraduated glass tubes that are perfect for small scale experimentation. They can usually be purchased in large quantities for very reasonable prices. Test tubes may be heated in a water bath, or in an open flame. If heating in a flame, be sure to gently wave the tube back and forth through the flame, while not putting the bottom directly into the flame to prevent flash-boiling and stressing the bottom of the test tube, which is the weakest part. Always hold it pointing away from yourself and others. Test tube holding clamps can also be purchased (or crudely made with some spare wire) to make handling hot test tubes easier and safer.

Volumetric flasks are used mainly for preparing very precise molar solutions. They are bulb shaped with long, narrow necks, and sometimes have the option to be closed with glass stoppers, although these are usually sold separately. Volumetric flasks only have one graduation, which marks the volume that the flask is labeled with. To use one, one must add the appropriate mass of solute to the flask, and then carefully add the solvent to the marked line. They come in many different sizes, most commonly 10, 25, 50, 100, 250, 500, and 1000mL, although sizes as small as 1mL and as large as 6000mL do exist. It is good to have a couple different sized volumetric flasks for preparing stock solutions and titrants, although they can be rather expensive, and are not absolutely necessary.

Every home chemist needs a good supply of basic glassware as described above, but there are other more specialized and complex pieces that are also very important. These are listed below, sorted by category:

Also simply called "drying pistol", it is a piece of laboratory glassware used to free samples from traces of water, or other impurities. It is called a "pistol" because of its resemblance to the firearm. Its use has declined due to modern hotplate technology and vacuum pumps.

Also called spirit lamp, it was used in the past as a quick heating source, though now it has largely been replaced by hotplates and other heating elements. If an open flame is required, gas torches are more often used.

A type of round-bottomed flask with a very long neck, used in the Kjeldahl method an old method for the quantitative determination of total nitrogen from organic and inorganic samples (proteins and ammonium compounds e.g.).

A retort is an old-style flask for distillation, with a long "beak" that works like a primitive air-cooled condenser. Retorts were widely used by alchemists and early modern chemists. They are rarely used today, but there are a few reactions they can be useful for, for example, distilling nitric acid from nitrate salts.

Different compositions of glass are used in lab glassware for different purposes. Each composition has its strengths and weaknesses.

Soda-lime glass is the most basic type of glass that is used in many household products. It is also used in some lab glassware that does not need to withstand high temperatures or other stresses. Soda-lime glass is easily identified by the greenish tinge that it has. Higher quality glassware is generally colorless or very slightly yellow. While borosilicate glass is almost always preferred for labware, soda lime glass is a very good material for cheap bulk glass tubing which can be cut and easily shaped in the flame of a Bunsen burner, unlike borosilicate which requires a hotter flame.

Borosilicate is the type of glass almost always used in lab glassware, prized for its high resistance to thermal shock and higher working temperature. It consists of mainly silicon dioxide , but also contains boron trioxide. Borosilicate glass is almost colorless but usually has a slight yellowish tint to it.

Quartz glass is less prone to thermal shock than borosilicate and can handle far higher temperatures. It is also more chemical resistant than other glass formulations since it consists of very pure fused silica. It is mainly used in applications where very high temperatures are required, such as in tube furnaces. It should be completely colorless. It requires extremely high temperatures to work or repair, this typically makes it much more expensive.