Kipp's apparatus, or Kipp apparatus or Kipp generator, is a device used to produce gases. It uses flowing of liquids regulated by gas pressure to start and stop reactions.

The apparatus consists of three glass bulbs and resembles a snowman. The upper bulb is separate from the other two and is connected with the lower bulb by a long "tail" with which it is inserted into the apparatus. The lower and the middle bulbs are connected by a short "neck". The upper bulb is a reservoir for a liquid reagent. The middle bulb is a reservoir for a solid reagent and the place where the reaction occurs. It has a tube with a stopcock through which the gas leaves the apparatus. The lower bulb also acts as a reservoir for the liquid reagent and serves as the place where the reagent stays while the pressure in the middle bulb keeps it there.

The necessary conditions for the apparatus to work properly are the following:

Instead of a solid insoluble reagent, an inert porous material such as pumice impregnated with a soluble or second liquid reagent can be used.

The choice of reagents depends on what gas do you want to produce:

Technically, any gas that can be evolved from a chemical reaction in a liquid medium under normal conditions can be produced in a Kipp apparatus. If you make a Kipp apparatus out of solid platinum and heat it up, you'll be even able to make fluorine in it via the Christe reaction. Of course, this is impossible to do in a normal glass apparatus.

Be careful when using the Kipp apparatus to synthesize flammable gases. An explosive gas-air mixture can form in the apparatus. Do not directly set the gas that exits it on fire, or Kipp's apparatus may explode. Put a gas washing bottle between the apparatus and the burner / nozzle to prevent Kipp apparatus explosions. 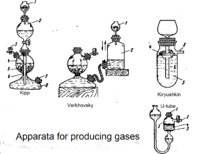 The Verkhovsky apparatus is notable in that it can be made from an old Kipp apparatus with a missing or broken upper bulb.