Acetylene (or ethyne) is a flammable gas used in welding and making explosives. It contains a triple bond between two carbons in its structure, making it the simplest alkyne, and has the formula C2H2.

Acetylene burns in oxygen with a very hot and bright flame, with a temperature of 2534 °C at atmospheric pressure. The temperature can be higher if nitrous oxide is used.

It will ignite on contact with chlorine at standard conditions.

Acetylene is used to make the explosives copper(I) acetylide and silver acetylide. These are both rather sensitive and moderately powerful primary explosives.

Acetylene reacts with the amides of alkali metals while in ammonia solution to form water-soluble alkali metal acetylides.

Acetylene cannot exist as a liquid at any temperature under normal pressures, and it is extremely inadvisable to pressurize the gas due to the high risk of an explosion. Industrially, cylinders of acetylene are filled with a porous inert sponge to avoid having high pressures of the gas. This sponge is filled with acetone or dimethylformamide, in which the the gas dissolves.

Mixtures of acetylene and air are extremely explosive, with acetylene volumes from 2.6% to 80% capable of detonating.

While acetylene itself may not have an odor, any cylinder of the gas will contain a small amount of an odorant, and the gas generated from calcium carbide and water always has a strong smell due to impurities.

Cylinders of acetylene are available generally at welding supply stores. There is a consumer use for cylinders of this gas.

In a home chemistry setting, acetylene is generated by the reaction of calcium carbide and water. The calcium carbide used is often a low grade, so it will produce a variety of other gases such as hydrogen sulfide and phosphine.

To increase the purity of acetylene from calcium carbide, the gas can be lead through a wash bottle containing sodium hydroxide, then plain water to remove any sodium hydroxide. 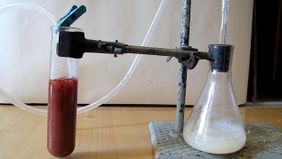 Explosions of acetylene can be very powerful. It is easily capable of detonation when pressurized, and is quite shock sensitive, meaning shock waves generated from explosives could set it off. Fuel/air mixtures can ignite very easily and will detonate or burn very hot and bright.

Although unlikely, acetylene can form very sensitive explosives on contact with copper, so the use of copper piping is inadvisable.

While generally not terrible toxic when pure, if generated from calcium carbide, many other gases toxic like hydrogen sulfide may be produced.

Acetylene is stored commercially in cylinders, where it is dissolved in acetone or dimethylformamide (DMF), contained in a gas cylinder with a porous filling (Agamassan).

A new method was developed in 2009, where acetone is stored in a metal-organic framework (MOF), a lattice-like structure made of copper oxide and benzene.[1]

Acetylene can be safely released in the atmosphere or burned.